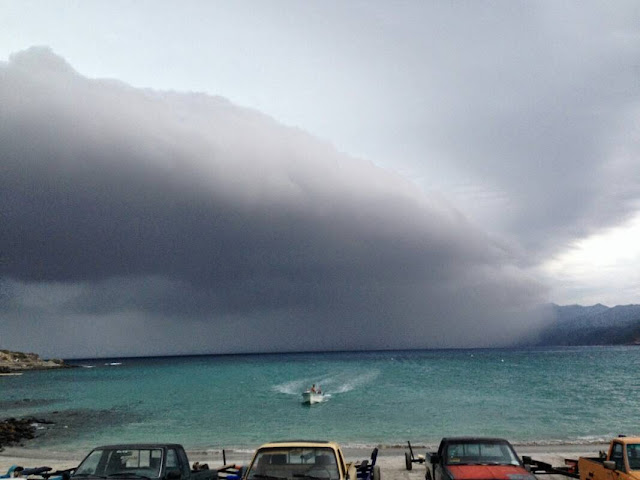 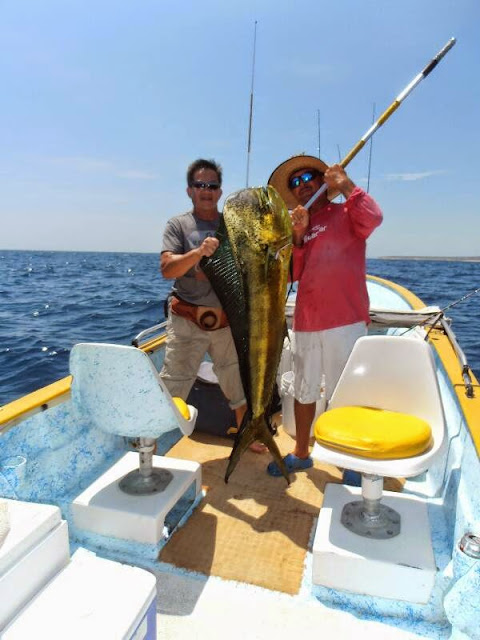 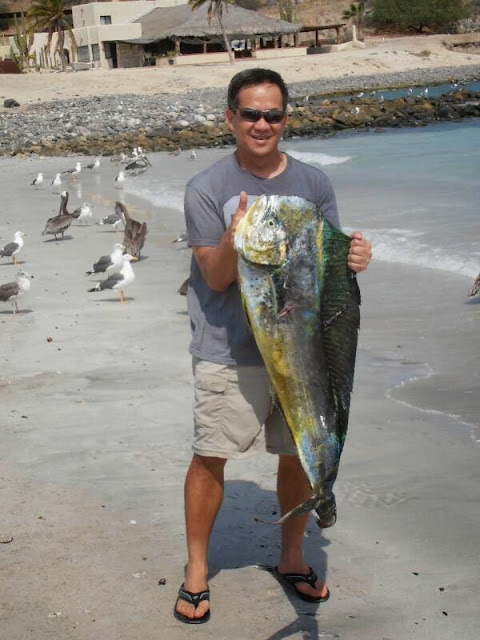 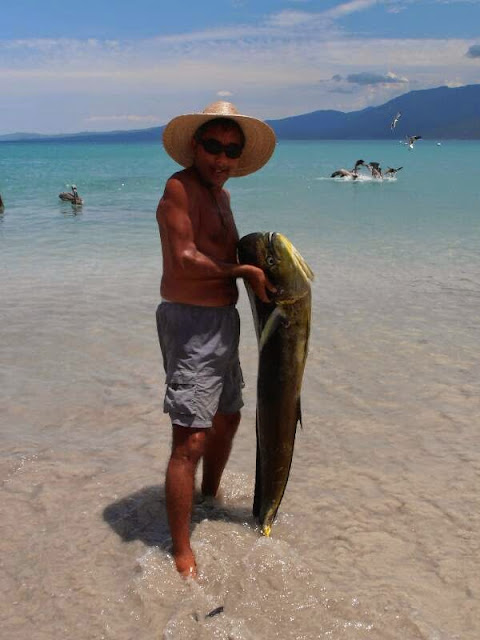 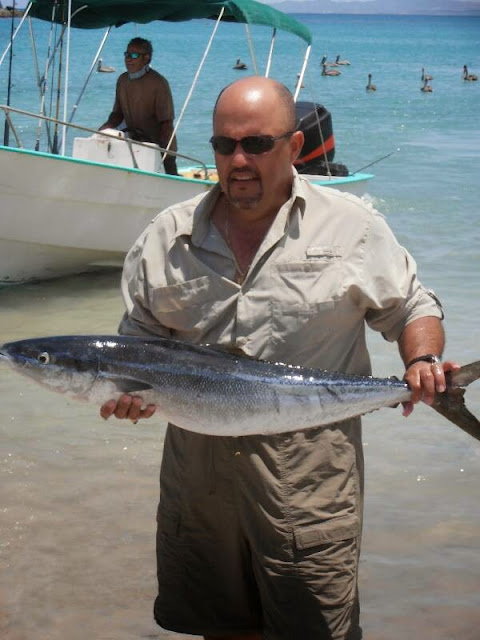 Email ThisBlogThis!Share to TwitterShare to FacebookShare to Pinterest
One word that sums up fishing this week is Bizarre.  To start with their was a super low tide mixed with a little swell that made launching the boats from the beach a little challenging.  We had wind on and off pretty much all day, everyday so you would have an hour of flat glassy water followed by a little wind chop then back to flat.  The conditions weren't the worst but they weren't the best either.  Water temps were warm if not hot between 85-88 degrees.  Fishing wasn't particularly better in any one location and boats were scattered around just trying to find some fish.  Their were a million, and I'm not kidding, small dorado in the 8"-24" range.  Mixed in occasionally were some bigger ones but these little guys need to grow a bit.
If your into catch and release of bill fish, this week was the week to fish for them.  There were large numbers of sailfish and marlin hanging around and they were easy to catch.  Their were some tuna caught one day.  A couple pangas came across a school of dophin that had some tuna in the 20-40 lb  range.  One boat caught 2 and the other caught 6, that was it.  The next day the dophin and tuna were no were to be found.  For the boats trying for wahoo, it was tough also.  The week before the wahoo were in full swing, every boat catching a couple, but this week was quite different.  First off, bait was difficult to catch.  No commercial boats were selling mackeral so that meant the pangero captains had to locate and try to catch them themselves.  We spent 2 hours trying to catch these mackeral, one by one on tiny little hooks and ended up with a couple in the bait tank.  The wahoo that were caught were caught using these little candy macks and even trolling rapalas.  Nothing was consistent.
We decided to head out to the buoys a couple days and travelled in the 20-30 mile range hitting every buoy on the way.  Bait was plentiful at the buoys, we were able to catch bonita, zebra, small yellowfin tuna, cocinero and once again a million small dorado.  We mixed it up trolling around each buoy and caught nothing but shark, sailfish and marlin.  Some of the buoys had small pods of dolphin at them that were thrashing the bait but no big dorado or tuna.  One interesting thing that happened one day that made us wonder what was really going on was we were trolling 2 small bonita around a buoy that had a handful of dolphin hanging out.  As we passed the buoy one of the reels lit up, fish on right! Nope, reeled it in and half the bait was bitten off.  We thought it was a shark based on the bite marks and the fact that we had been battling with the sharks at most of the buoys.  We sent another bonita back out but kept them close to the boat to see if we see what was eating them.  As we were trolling by the buoy again the dolphin came up behind our baits, grabbed them and bit them right off the hooks!  In all our years of fishing we have never seen this happen.  The dolphin were actively feeding on our hooked bait.  When we stopped to catch bait using sadikis the dolphin would chase the bait up that was hooked, coming right to the surface.  It was the craziest thing!  After seeing this happen first hand and thinking about what could be going on with the fishing we wondered if their really was no bait around.  Were the dolphin that hungry that they would go after our bait?  Maybe the bait we were seeing at the buoys was actually not much at all in the large scheme.  We knew their was no sardina around but were the fish all gone because they too were looking for the bait?
Lucky for us, our friends that fished, and a lot of hard work from the fishing pangeros, fisherman were able to catch few nice size fish.  But all in all, fishing was possibly the most difficult that we have seen in the last 10 years.  The water is hot and not much bait around.  This weeks fishing definitely stands out as one of the most difficult in one of the best fishing locations in the world but it is fishing and it could all change next week.  We will see what happens. 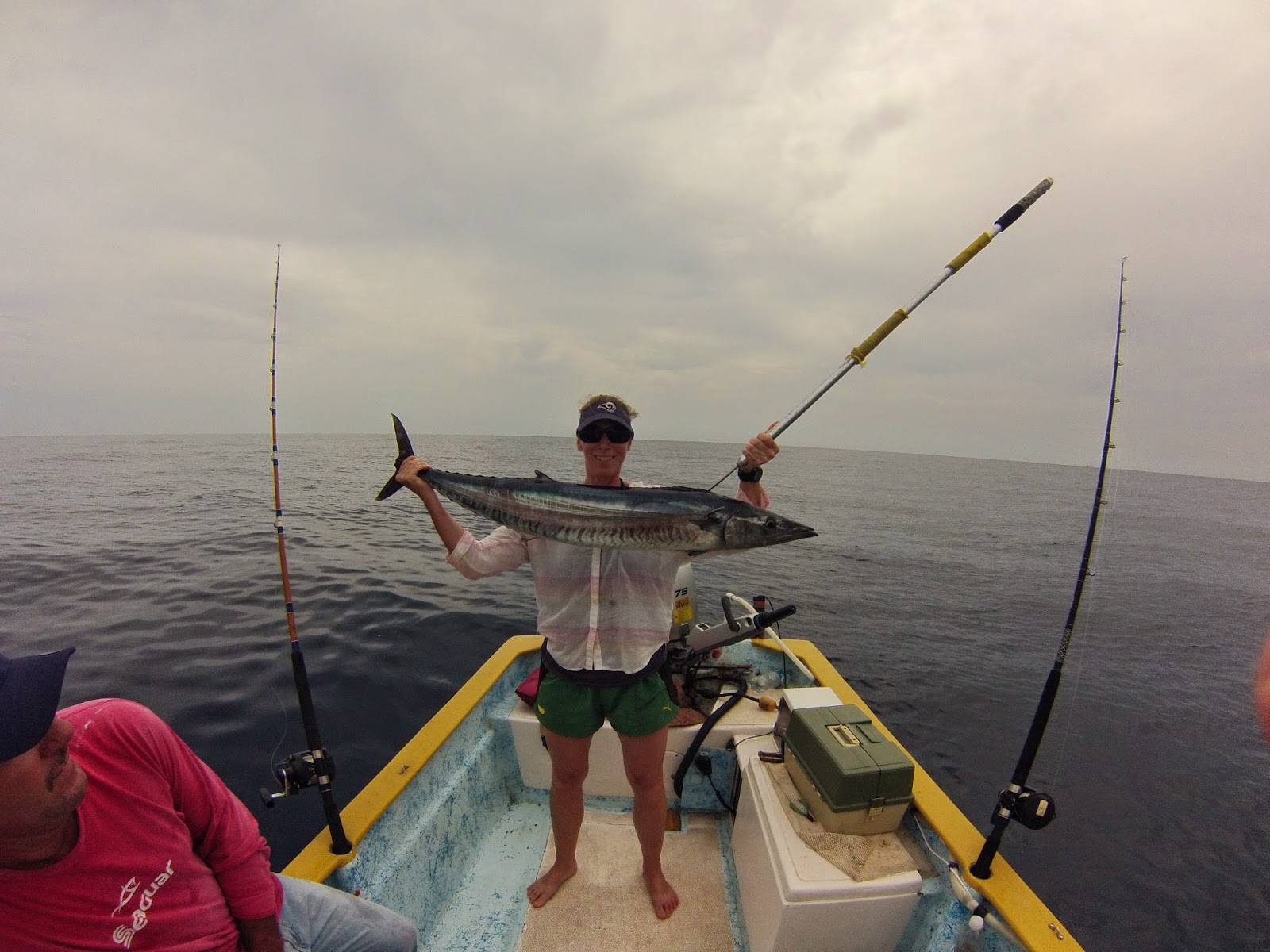 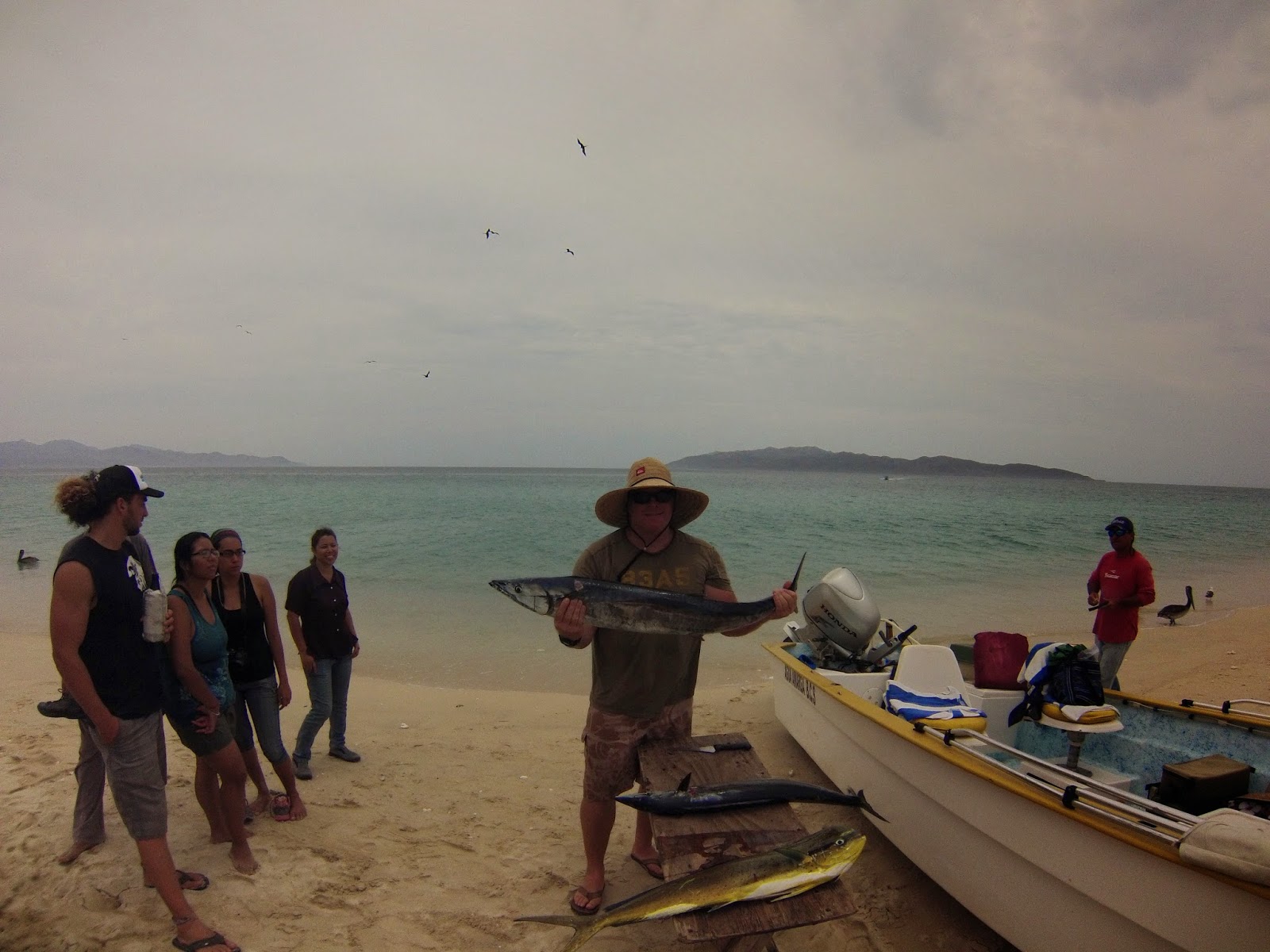 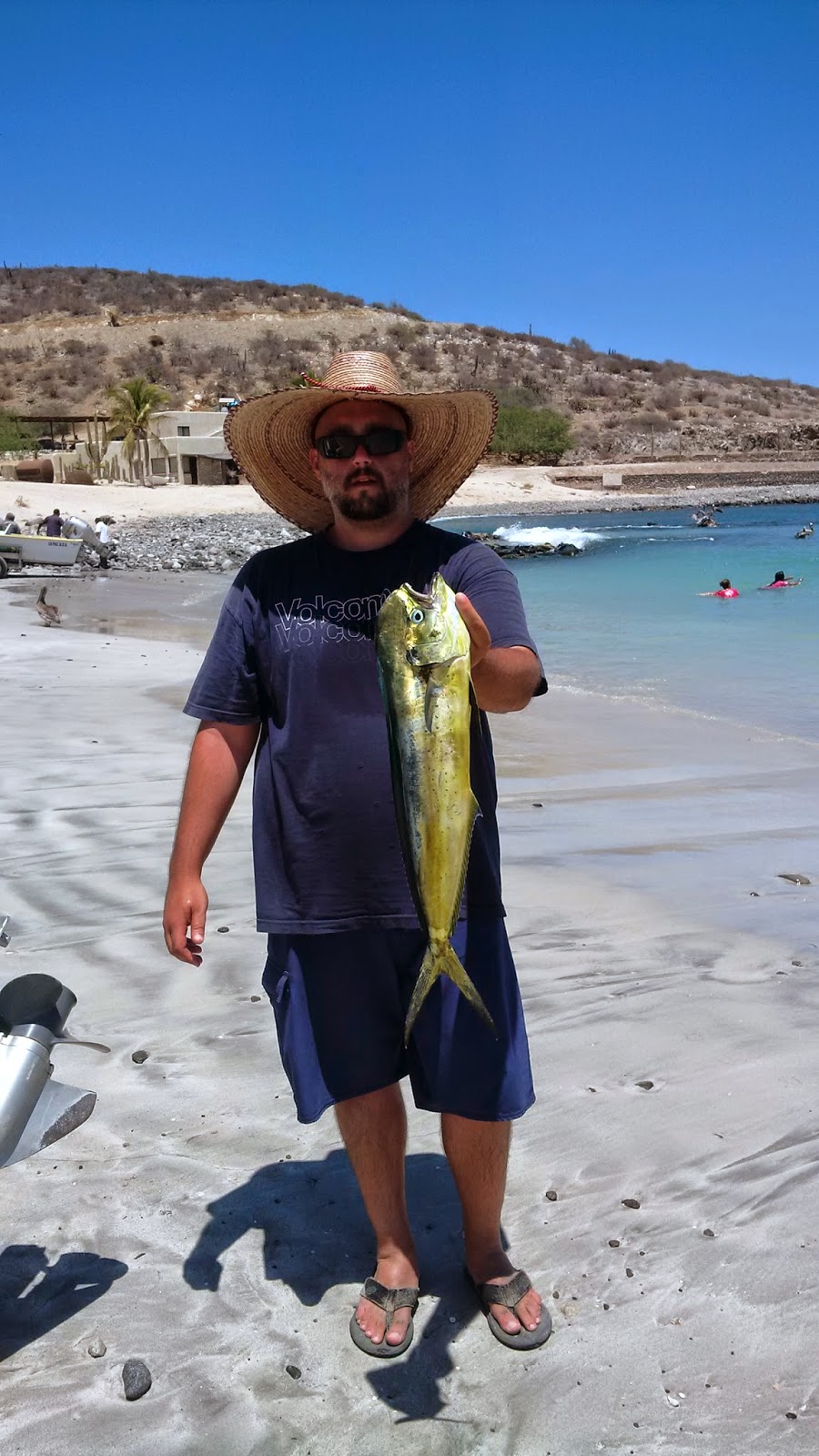 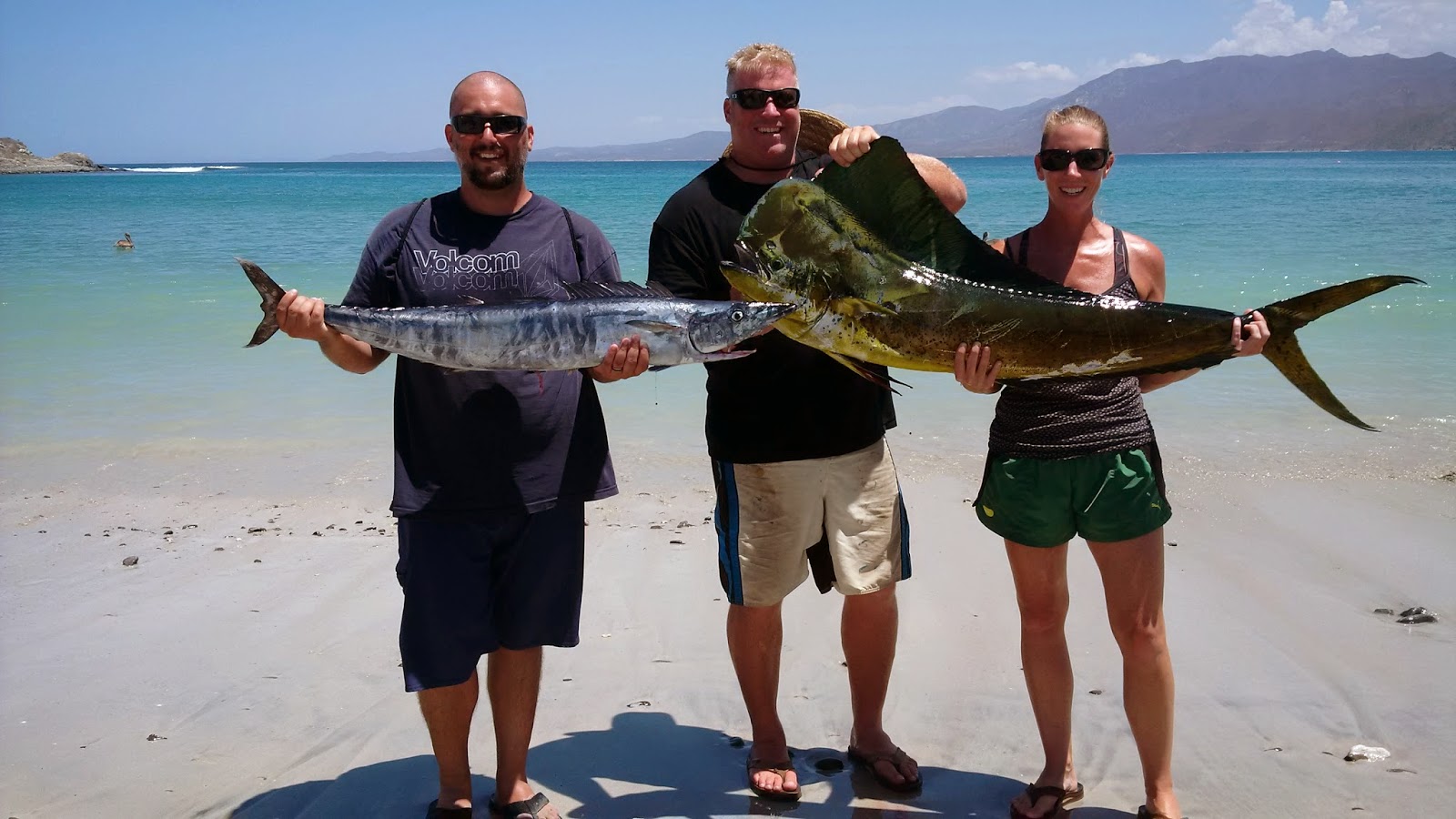