Gerardo Hernandez of Tortuga Sportfishing said his pangas launching out of Ensenada de los Muertos south of La Paz ran into a super abundance of black skipjack, or barrilete in Spanish, at the north end of Isla Cerralvo that hampered yellowtail fishing. "Because there were so many barrilete, we could not get to the yellowtail," Hernandez said. "But the fishing area at Isla Cerralvo still produced lots of pargos, cabrilla, and sierra, and there were lots of roosterfish at Las Arenas." Tortuga Sportfishing pangas fishing south at El Cardonal found dorado both near shore and at the offshore buoys. "The whole area has good fishing," Hernandez said. "Everywhere, we're seeing big numbers of marlin and some big dorado. We have enough bait at Punta Perico and at the south end of the island." 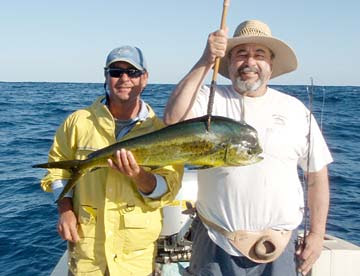 LA PAZ PANGAS--Frank Quiñones, right, and his group fished aboard a Tortuga Sportfishing panga at La Paz for a variety of fish fillets to take home including this dorado caught with Tortuga's Capt. Rigo Lucero.
Publicado por Alonso en 6:37 PM No comments:

Gerardo Hernandez of Tortuga Sport Fishing said southern la Paz waters had some days of wind during the week that kept his pangas close to shore for large dog snapper, sierra, dorado, cabrilla, and some marlin seen around Punta Perico. Calming winds at midweek allowed Tortuga pangas to run back to the north end of Isla Cerralvo and out to the buoys for very good catches of yellowtail of 30 to 40 pounds, dorado of 25 to 35 pounds, and sailfish released. "We have enough sardina bait at both Punta Perico and around Isla Cerralvo," Hernandez said. "Air temperatures were up to 88 degrees, so we're starting to feel the heat now and that's making the fishing even better." 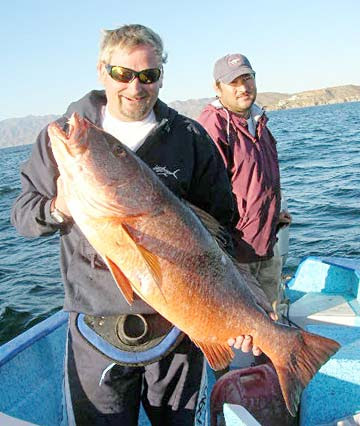 Gerardo Hernandez of Tortuga Sportfishing said the La Paz fishing area had warm, windless weather in the 80s, and fishing was good for a wide variety of species including dorado of 20 to 30 pounds caught at the buoys, pargo lisa and pargo perro at Isla Cerralvo, yellowtail at the north end of the island, and lots of sierra at Las Arenas. "We have lots of bait at the south end of Isla Cerralvo and also at Punta Perico," Hernandez said. "The anglers at La Paz right now are having days of good action and lots of fish. We're catching a lot of fish species from Ensenada de los Muertos to the island." 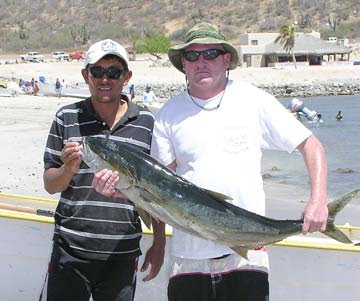 LOS MUERTOS PANGAS--John More, right, of Orange, Calif., fished on a Tortuga Sportfishing panga out of La Paz' Ensenada de los Muertos with Tortuga Capt. Nufo Green, left, and found good action including quality yellowtail like this one. In the background is the Giggling Marlin restaurant near the panga launch beach at the northeast corner of the bay.

Gerardo Hernandez of Tortuga Sportfishing said yellowtail counts were down slightly from the very good action of the previous week, but Tortuga pangas fishing the Las Arenas side still did well on yellowtail, sierra, cabrilla, mixed pargos, and jack crevalle near the launch beach at Ensenada de los Muertos and out at Isla Cerralvo. "We're starting to feel the effects of the warm season," Hernandez said. "La Paz temperatures are in the 80s with clear skies. We continue to find lots of bait in the different fishing areas, and this is letting us look for the fish everywhere. There are a lot of fish at the island and good fishing for jack crevalle for anglers who are looking for a good fight with that species." 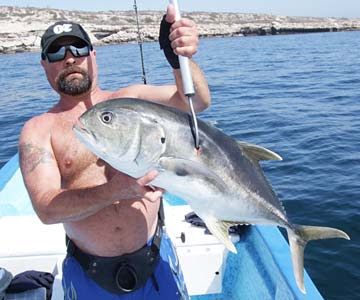 LA PAZ TORO--Greg Garcia of Santa Ana, Calif., hooked this good-sized jack crevalle, or toro in Spanish, while panga fishing out of Ensenada de los Muertos south of La Paz with Tortuga Sportfishing's Capt. Hugo Lucero. Said Tortuga's Gerardo Hernandez, "Even with the big yellowtail bite now at La Paz, you still do have the opportunity to catch other species if you want to."

Gerardo Hernandez of La Paz' Tortuga Sportfishing said, "At this time yellowtail and pargo fishing is at a maximum at Punta Perico. This is going on all day long, in the morning, in the afternoon. The whole area is full of bait and action." Tortuga Sportfishing pangas out of Ensenada de los Muertos also found big numbers of yellowtail at the north end of Isla Cerralvo, but few boats ran that far. "There are also sierra there," Hernandez said, "but all our pangas are fishing at Punta Perico all day long." La Paz fishing area weather was warm in the mid-80s with few tourists present following the Semana Santa peak crowds. 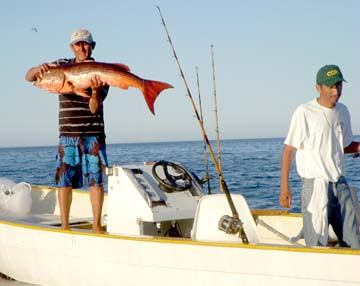 NOT JUST YELLOWTAIL--The quality yellowtail bite going on at La Paz right now is also producing good specimens of mixed snappers close to Punta Perico on the south side. Here's a nice pargo lisa, or mullet snapper, landed by Capt. Nufo Green of Tortuga Sportfishing on a trip last week that produced 5 pargo and 2 yellowtail.