Gerardo Hernandez of Tortuga Sportfishing at La Paz reported mixed weather for his charter pangas fishing the Las Arenas side south of the city, with slightly warming air temperatures, some light rain on Monday morning, and plenty of wind. Tortuga Sportfishing pangas working sheltered waters around Punta Perico caught a mix of yellowtail, cabrilla, pargo lisa, and pargon. "We have no problems with bait," Hernandez said. "We have great amounts of bait in the same areas where we are fishing."
Anglers fishing with Tortuga during the week included the Annington family of Houston, Texas, who landed mixed inshore fish including a pargo lisa at 30 pounds. 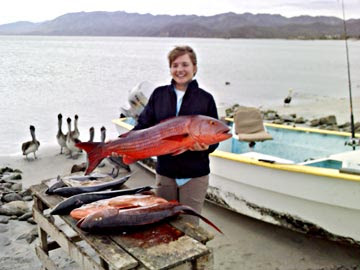 Gerardo Hernandez of Tortuga Sportfishing reported a week of strong winds on the Las Arenas side of La Paz, with cool air temperatures in the 60s and lots of clouds over the mountains.
"There are few tourist anglers in the La Paz area," Hernandez said. "The year is starting slow, but we're expecting reservations for the coming months."
Tortuga Sportfishing pangas launching out of Ensenada de los Muertos found seasonable action near shore for mixed sierra, snappers, pargo lisa, cabrilla, some dorado of 20 pounds, and some marlin seen. 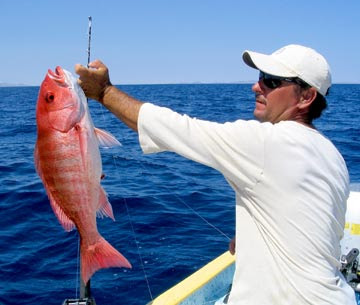 PERFECT EATIN' FISH--Capt. Rigo Lucero, of Tortuga Sportfishing at La Paz, hoists a perfect meal-sized example of the prized true red snapper, or huachinango in Spanish, a gourmet treat when slashed and fried with garlic, or plain salt broiled Japanese-style.

Gerardo Hernandez of Tortuga Sportfishing at La Paz reported some winter winds on the Sea Cortez for the final week of December, as Tortuga pangas fishing the Las Arenas side south of the city worked mostly close to shore around Ensenada de los Muertos and Punta Perico for a mix of sierra, pargo lisa to 15 pounds, good-sized pompano, and some cabrilla."On days when the weather allowed us to get out to the south end of Isla Cerralvo we caught good numbers of wahoo," Hernandez said. "We continue to have plenty of sardina bait fish close-by, so we are not having to run to distant locations." 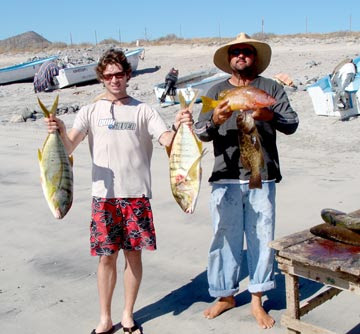