Gerardo Hernandez of Tortuga Sportfishing at La Paz reported a very quiet week on the Las Arenas side south of the city as few anglers were present and those that did go out found scattered action. "It's very calm as far as fishing goes in our area around Punta Arena de La Ventana," Hernandez said. "There's little activity." Small yellowfin tuna led fish counts as fewer dorado were found by Tortuga Sportfishing pangas. La Paz fishing area weather was mostly calm, with some cooling breezes during the hot days, and water temperatures in the 80s.For the previous La Paz fishing week ending July 17, 2009, Jonathan Roldan of Tailhunter International reported air temperatures topping 100 degrees daily and continued good catches of dorado at 5 to 20 pounds, plus some into the 50-pound class. Yellowfin tuna of 10 to 20 pounds were caught very close to shore at Las Arenas. 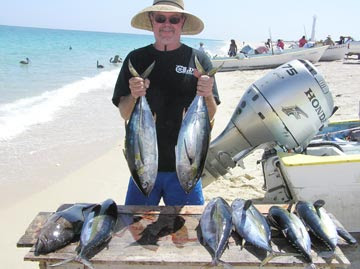 Gerardo Hernandez of Tortuga Sportfishing reported some cloudy skies over La Paz, with air temperatures in the high-90, and no rain. Tortuga Sportfishing pangas working on the Las Arenas side south of town found good numbers of dorado at 15 to 20 pounds plus yellowfin tuna of the same sizes during fishing at Isla Cerralvo. Some dorado of 40 to 50 pounds were also caught at the buoys.
Some out-of-season yellowtail of about 20 pounds were also found by Tortuga pangas. "This is unusual for the season," Hernandez said. "But with this good fishing every day, one can't predict what will be caught."
Sardina bait fish continued in good supply at Isla Cerralvo. Few anglers were present in La Paz. "The tourists are few, but we're always waiting for them," Hernandez said. 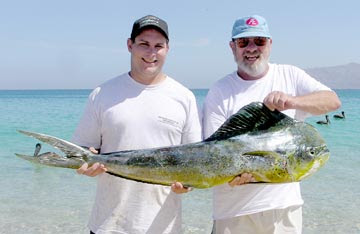 LA PAZ PANGA FISHING--Matt Potter, left, and his father Claude of Huntington Beach, Calif., with a nice dorado caught while fishing aboard a Tortuga Sportfishing panga south of La Paz.

Gerardo Hernandez of Tortuga Sportfishing reported full summer conditions for his pangas fishing on the Las Arenas side south of La Paz. "We have hot weather and winds from the south that interfered with the fishing," Hernandez said.
Tortuga Sportfishing pangas found wind and strong currents at the Las Arenas-side offshore buoys and returned to the beach with just one or two fish. Few dorado were seen in fishing areas near the Baja coast, but some smaller dorado were caught at the south end of Isla Cerralvo, in addition to small tuna, and some wahoo.Tortuga Sportfishing captains also targeted shallow water areas around Punta Perico and Las Arenas for smaller snappers and good numbers of roosterfish in all sizes. 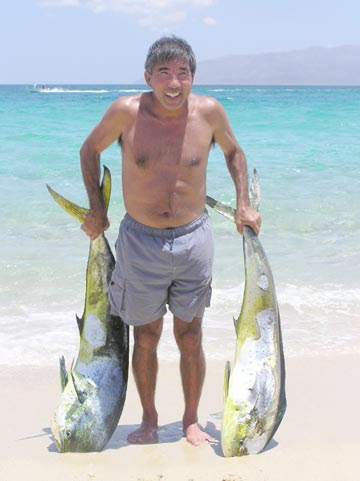 BACK ON THE BEACH--Dean Kitano of Huntington Beach, Calif., caught a nice pair of La Paz dorado during his fishing trip aboard a Tortuga Sportfishing panga that launched over the beach near the Punta Arena de la Ventana lighthouse south of the city.

Gerardo Hernandez of Tortuga Sportfishing at La Paz reported mostly calm seas and pleasant air temperatures in the 90s for his charter pangas fishing on La Paz' Las Arenas side. Dorado led the fish counts as mahi of 25 to 40 pounds were caught at Isla Cerralvo, at Punta Perico on the Baja shore, and along the Baja coast south of Ensenada de los Muertos.
Good numbers of yellowfin tuna at 12 to 15 pounds were also caught south of Isla Cerralvo. Boats fishing in shallow water scored on roosterfish and jack crevalle, or toro in Spanish."In general, the fishing is going great," Hernandez said, "although La Paz doesn't have many anglers at this time of year." 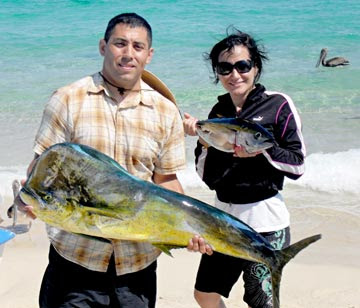