As water temperatures warm different species of fish have started showing up. Catches of Yellowtail, Pargo, Cabrilla and Sierra making their debut. Pangeros made the journey to the North end of Cerralvo Island for the yellowtail that were still biting. Fish were feeding on sardine and ranged in size from 25-50lbs. Fisherman heading back to the beach, trolled along the island and caught mixed bags of large cabrilla, small snapper and small yellowtail. Closer to shore at Punta Perico were the Pargo. Big balls of red could be seen moving up and down the shoreline. Fisherman got bait at the South end of the island and got ready for action. Most days the fish stayed in tight schools but on occasion were scattered about, some cruising 20 feet from shore. Your best bet was using lots of live and dead sardine. Pargo in the 25-60lb range were caught. If the Pargo weren't biting the cabrilla were. Fisherman did not go home empty handed. Commercial fisherman say the Sierra have just started showing up. In the picture is fisherman Pete, Nick and Sydney with a Pargo they caught that day. Chao Stanley cought Dog snapers,big cabrilla also Chuy Ordoña & Cocay show the Rooster fish. 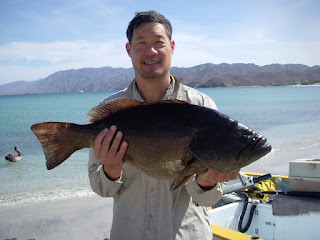 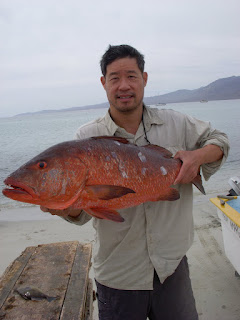 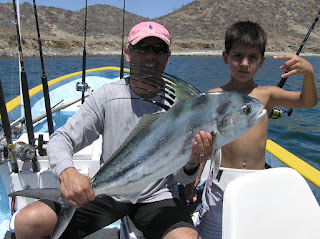 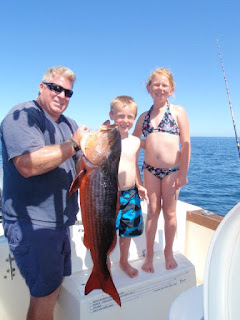