Gerardo Hernandez of Tortuga Sportfishing at La Paz reported some days of wind on the south side that kept his pangas fishing close to shore for catches around Ensenada de los Muertos of medium-sized dorado and yellowfin tuna, both of about 15 to 25 pounds. Some pangas ran offshore to the 88 Bank east of Isla Cerralvo and found larger fish. "We're hoping now to catch some larger dorado," Hernandez said. "Recently, we've been using squid bait for the tuna. We also have good quantities of sardina bait available." La Paz fishing area weather was cooler in the 90s. 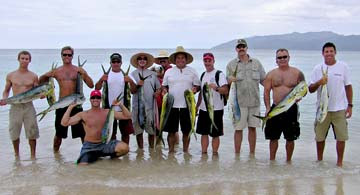 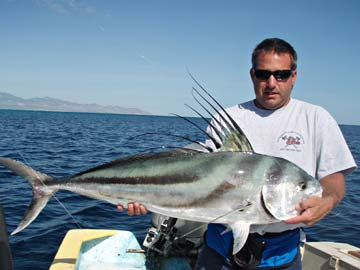 ANAHEIM BOMBEROS--A big group of firefighters, or bomberos in Spanish, found good panga fishing action for dorado at La Paz with Tortuga Sportfishing captains. Ralph Moreno, below, shows off a roosterfish mixed in with the group's offshore catch that included yellowfin tuna as well.
Publicado por Alonso en 9:57 AM No comments: 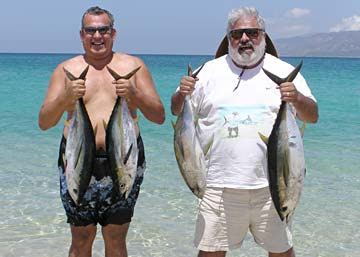 Gerardo Hernandez of Tortuga Sportfishing at La Paz said his pangas launching on the Las Arenas side found improved action for medium dorado of 15 to 25 pounds while fishing north off Las Cruces following last week's rough tropical weather. "We also caught yellowfin tuna to the south off Punta Pescadero," Hernandez said. "They're still small, but they have been consistent for the past several days. We haven't caught anything big in recent days, but we're waiting for them to come."La Paz fishing area weather was cloudy and humid in the mid-90s, with some periods of rough seas but no rain. "There is plenty of bait around Isla Cerralvo, but sometimes it's difficult to get it," Hernandez said. 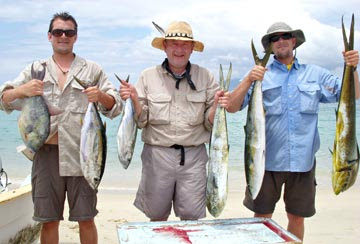 Gerardo Hernandez of Tortuga Sportfishing at La Paz said his pangas were already fishing again, for a few dorado on the day after the passage of Julio. The day after that, yellowfin tuna were found again by pangas running out to Isla Cerralvo and the 88 Bank. "But there is a lot of current, and we didn't catch dorado out there," Hernandez said.

Fishing conditions on La Paz' Las Arenas side were returning to normal by midweek. "We really don't have any complaints about the tropical storm," Hernandez said. "It was more of a benefit than a problem."

At midweek, pangas running to the south point of the island were beginning to catch some dorado in addition to tuna. But pangas checking the action at the north end of the island scored zeros. 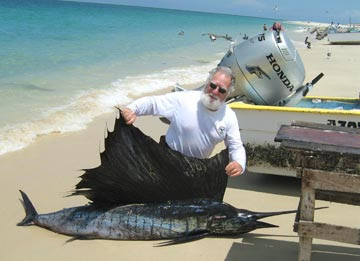 HARD BATTLING SAILFISH--This good-sized sailfish died during the fight after being hooked south of La Paz by Larry Klein and his family group who were fishing aboard a Tortuga Sportfishing panga with Capt. Rigo Lucero.
Publicado por Alonso en 10:29 AM No comments: