Gerardo Hernandez of Tortuga Sportfishing reported continued summer-like weather for his pangas fishing the Las Arenas side of La Paz, but with some fog in the main fishing areas of Isla Cerralvo, the buoys, and the immediate area of Ensenada de los Muertos.
Tortuga Sportfishing pangas did well on pargo, wahoo, and good numbers of amberjack at 20 to 30 pounds while fishing at the island. Around the buoys, the action was scattered, but some dorado to about 30 pounds were caught.
Smaller roosterfish continued near shore, and some pangas did well on larger pargos.
Sardina bait fish were in good supply at Isla Cerralvo, and some caballito baits were also available that were used with good results on the larger snappers. 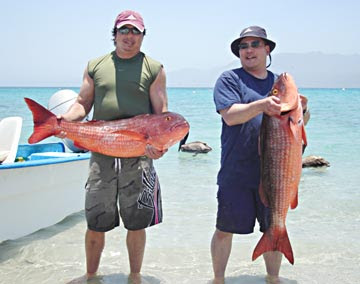 Gerardo Hernandez of Tortuga Sportfishing on the Las Arenas side of La Paz reported more summer-like fishing conditions, with weather in the 90s and seasonable winds coming more from the south. "In a few days, we'll be moving to launch pangas at Punta Arena for better protection and easier launching for our clients," Hernandez said. "Yesterday, we had some bothersome wind at Ensenada de los Muertos."
Tortuga Sportfishing pangas found good fishing at both Isla Cerralvo and Punta Perico on the Baja shore. "We had good quantities of wahoo at the island," Hernandez said. "At Punta Perico there are pargo lisa and big dog snapper, or pargones, up to 50 pounds."
Tortuga Sportfishing pangas running out to the 88 bank east of Isla Cerralvo found marlin and sailfish but no dorado. 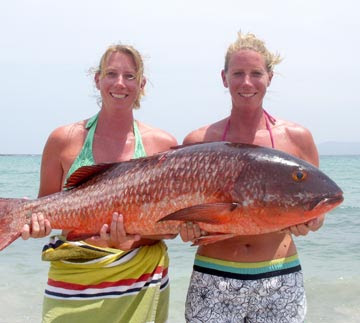 LA PAZ DOUBLE WHAMMY--Twins, Cassy, left, and Crissy Teichman are fishing at La Paz with Tortuga Sportfishing and landed this quality pargo lisa last week at 46 pounds, plus a nice mix of other snappers and some wahoo to 40 pounds. They are fishing with Tortuga's Capt. Hugo Lucero.
Publicado por Alonso en 1:57 PM No comments: 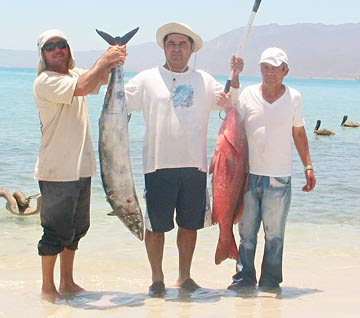 Gerardo Hernandez of Tortuga Sportfishing at La Paz reported good fishing weather in the 80, with days of good action for dorado offshore, and larger snappers, including large mullet snapper, broken off in the reefs.
Species caught in good inshore fishing action included cabrilla, mixed snappers, and good numbers of amberjack.
Hernandez also noted that tourists and anglers continued to be few at La Paz. 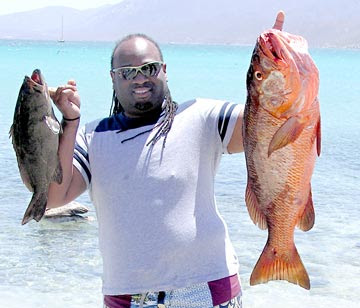 INSHORE AT LA PAZ--A variety catch along the Baja coast including this leopard grouper and red colored dog snapper was scored by Stamford, Conn., angler Eduard Singleton during panga fishing on La Paz' Las Arenas side with Tortuga Sportfishing.