Gerardo Hernandez of Tortuga Sportfishing at La Paz reported typical summer fishing weather on the Las Arenas side of the hill, with air temperatures in the 90s, some cloudy but rainless skies, and panga fishing at the 88 Bank offshore buoys producing dorado to 45 pounds plus striped marlin. "The bigger fish were caught by anglers arriving at the bank early and fishing with small barrilete baits," Hernandez said. "There's a lot of sea weed around Las Cruces, and many smaller dorado of 30 to 35 pounds are located there." Big numbers of medium-sized roosterfish were also located at La Ventana and southwards to the Punta Arena de la Ventana lighthouse. "We've got a large quantity of sardina bait at Isla Cerralvo and this helps the fishing very much right now," Hernandez said. 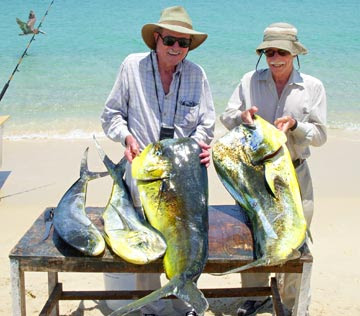 FULL FILLET TABLE--Ken Faunce of San Francisco, Calif., and John Steintz of San Diego, Calif., filled the fillet table on the beach south of La Paz after a panga outing with Tortuga Sportfishing that produced these quality dorado. 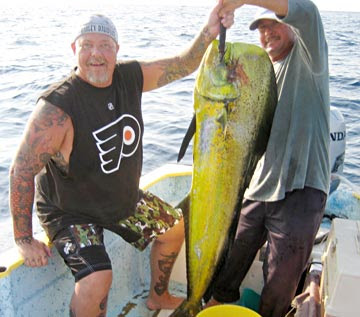 Gerardo Hernandez of Tortuga Sportfishing said his pangas fishing the Las Arenas side south of La Paz had some days of completely flat sea conditions, with summer temperatures in the 90s, and continued action close by off Bahia de la Ventana for dorado in the 20 to 30-pound class. Dorado of 35 to 40 pounds were also caught by pangas running to Las Cruces, and some big fish were caught at the buoys. "Some boats also found big ones at the 88 Bank buoys," Hernandez said. Pangas fishing near shore at the south end of Isla Cerralvo found good action for amberjack, pargo, and some yellowtail. 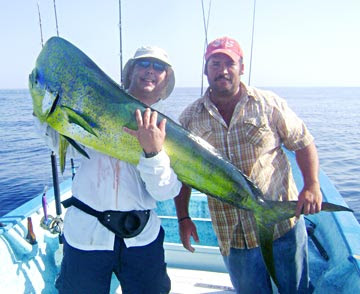 IT'S DORADO SEASON--The southern Sea of Cortez north to Loreto has had a good early summer dorado season this year and Mark Stoner, left, of Huntington Beach, Calif., hooked this nice bull out of La Paz' Las Arenas side while fishing at the 88 Bank with Tortuga Sportfishing's Capt. Adrian Lucero.
Publicado por Alonso en 10:04 PM No comments:

Gerardo Hernandez of Tortuga Sportfishing said his La Paz south-side pangas found full summer fishing conditions by the end of the week, with warm temperatures, calm seas arriving, and catches of large dorado at the 88 Bank outside Isla Cerralvo leading the counts. "Other boats that fished close to the south end of the island did very well on pompano, amberjack, pargos, and wahoo," Hernandez said. "We also found marlin, sailfish, and lots of roosterfish that were released. The best roosterfish action was on the Baja shore at Punta Perico." Live bait supplies continued good at Isla Cerralvo, helping to increase fishing time on the water for Las Arenas side pangas. 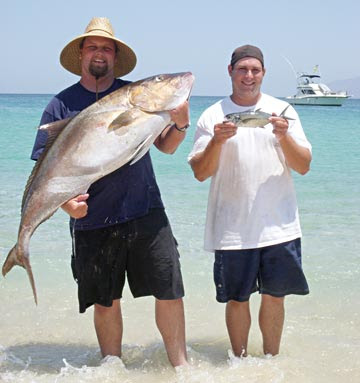 Gerardo Hernandez of Tortuga Sportfishing at La Paz said his Las Arenas side pangas fished in variable winds with good action on mixed species including summer season yellowtail, pargo lisa, pargo perro, some pompano, and amberjack and wahoo of good size. "We're feeling the heat now with air temperatures to 95 degrees," Hernandez said. "Water temperatures have been up to the 80s at the 88 Bank, and 78 to 80 degrees close to Isla Cerralvo. We had some large swell outside that made it hard for pangas to fish at the buoys." Tortuga pangas found their best dorado counts on medium fish at Las Cruces, and some dorado to 40 pounds were caught at the buoys on days when pangas were able to get outside. 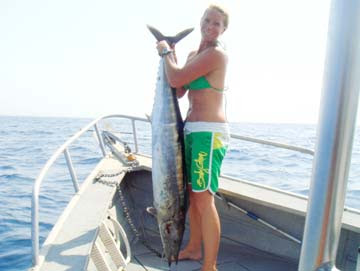 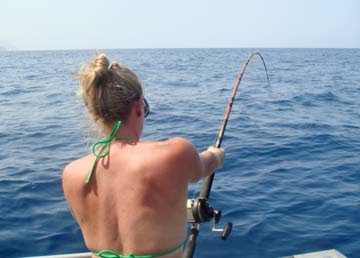