The weather was beautiful around La Paz and the beaches

The fish were few but mighty for this group! Their catch was the talk of the beach at Las Arenas as few boats came in with even fewer fish. No sardines were around so everyone had to pick up Cocinera and Barred reef fish to troll with excellent results on a few big fish. The weather was beautiful around La Paz and the beaches. When the Blue Water came in some, the fish hit hard! Captain Rigo skillfully found a wide  variety of fish. The fish this group caught were remarkable and the fishermen are already planning their next trip with Tortuga Sportfishing.

Mongo Dorado - Mark Bird from San Antonio, Texas scored for this big Dorado (Mahi-Mahi) the first day. We hooked two at the same time while going for bait at the buoy, one in the boat (40 - 50#) and one shredded the line after diving under the boat. I guess batting .500 is not so bad!

Big Dog Pargo - This 50+ pound Pargo hit a trolled Cocinero and Tom Chapman from San Ramon, California thought he had the "Big Dog Pargo Dienton" (Dog Snapper) for the day. Little did he know that Mark Bird would come up with and even bigger one (70+ pound) about an hour later..... " Who's Yo Daddy Now?!!!" Fishing is just like that.

Jumpin Jack Flash - other wise known as Jack Crevaille  ("Toro" locally) came to the boat on the third day. A personal biggest for that species for Tom Chapman! Toro Fought the good fight so we let it go to get bigger for another day.

Rooster - The slashing attack on a trolled Cocinero by this excellent Roosterfish turned out to be a great fight for Ruben Garza from Plano, Texas. These fish are hard fighters and Ruben had a great time. He let it go to grow some more!! 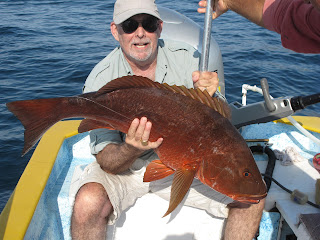 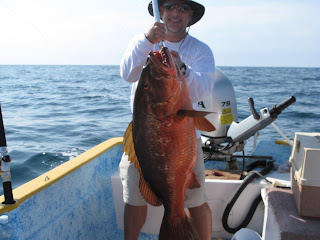 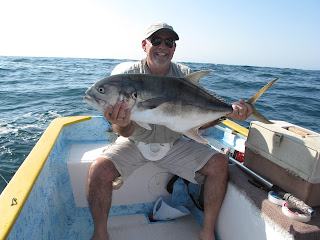 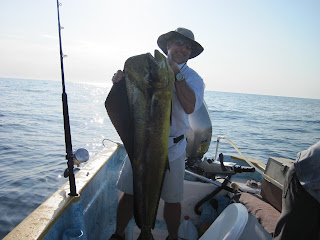 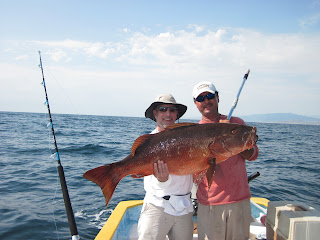 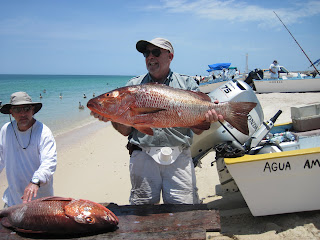 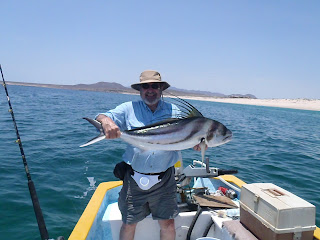 water that just won't go away

May 27-June 2
Fishing has proven to be very difficult with the super green water that just won't go away.  Green water and lack of bait makes it definitely more challenging.  Hard to believe that just one week earlier waters were full of dolphin as far as you could see and you guessed it, tuna underneath.  With the tuna bite lasting only 2 days, they came and were gone just like that.  Then that pesky green water came in and just kept hanging around.  Although fishing was difficult, the Ulises Ochoa group were able to pull out some dorado at the North end of Cerralvo island, some large rooster and some snapper.   One of the fisherman in the Ochoa group did catch a large Dog Tooth Snapper weighing about 45 lbs near Punta Arena.  It was the best catch of the week.  Also, one of the locals caught 2 wahoo at the South end of the island.  Most fisherman hung close to Punta Arena and caught alot of large rooster and snapper. Hopefully the water will change back to blue soon and the bait will return.
June 3-13
This week the waters are starting to look more normal and are turning blue again. We are hoping it will bring with it more bait and fish. The last couple weeks have proven difficult with the really green waters not only in close but also out past the 88 bank. Bait is still difficult to catch but fisherman have been able to catch some very big rooster near Punta Arena. Some dorado have been caught farther South in the 25lb range and hopefully they will keep heading North for some closer catches. This week Mr. Hoyt and his friend Mike fished and caught some big rooster as well as Toro. 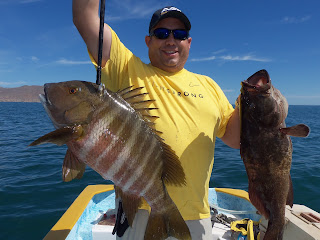 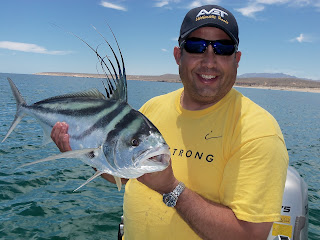 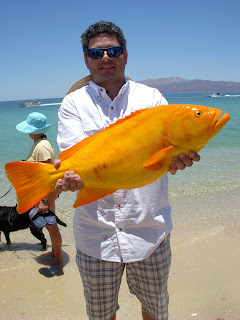 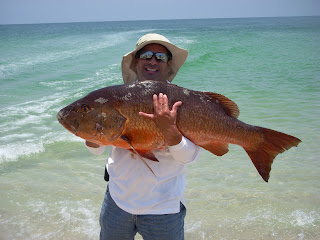 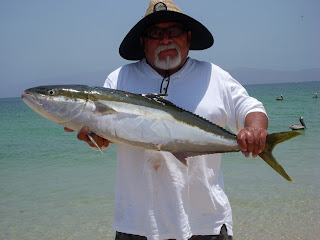 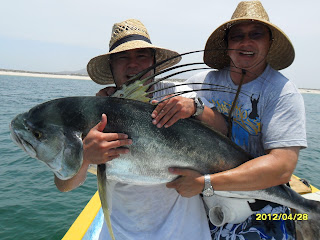 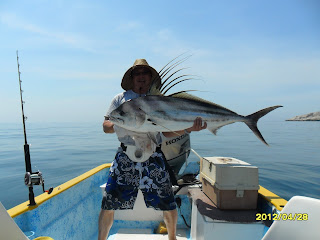 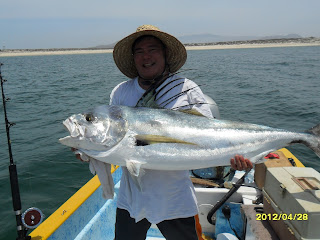