Gerardo Hernandez of Tortuga Sportfishing reported a week of windy and cloudy conditions for his charter pangas fishing the Las Arenas area south of La Paz, at Punta Arena de la Ventana, and also at the offshore buoys when winds permitted. "We had less action for dorado this week due to problems reaching the buoys," Hernandez said. "But we still caught pargos around Isla Cerralvo and fishing on Wednesday was good for larger dorado at the buoys, although few pangas went out to fish for them. Most pangas are fishing the south end of Isla Cerralvo and finding some wahoo and pompano also. Fishing conditions are improving and we are feeling summer temperatures in the 90s." Sardina baits continued in adequate supply in the southern La Paz fishing area. 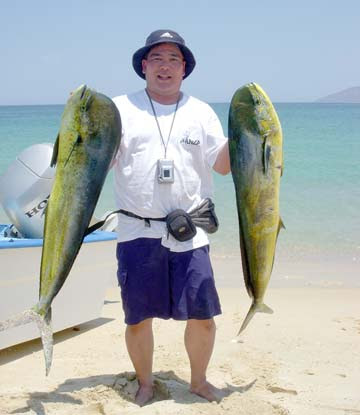 Gerardo Hernandez of Tortuga Sportfishing reported a week of variable weather on the Las Arenas side of La Paz that reduced fish counts and kept pangas from going offshore on some days. "The winds kept us from always having good fishing," Hernandez said. "Especially on Wednesday, the boats had to come in early." Before the wind hit, Tortuga captains found dorado including a few to 48 pounds at the buoys. Bait fish continued in good supply at Isla Cerralvo. La Paz fishing area weather had pleasant temperatures in the 80s. Anglers fishing out of Ensenada de los Muertos with Tortuga during the week included Bob Nishida and Erik Saiki, who caught marlin, pargos, roosterfish, and some large dorado with Capt. Hugo Lucero. 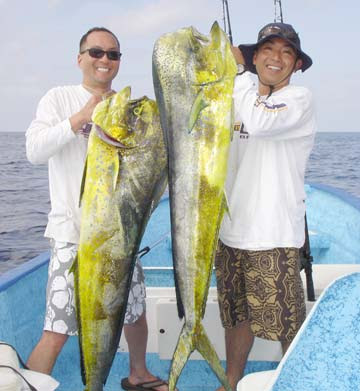 Gerardo Hernandez of Tortuga Sportfishing at La Paz said some strong north winds kept his pangas fishing close to Ensenada de los Muertos but with good results on pargo lisa and mixed inshore species, plus very good results on offshore dorado of 35 to 45 pounds at the buoys on mornings when the wind permitted pangas to run out. "Those anglers that arrived at the buoys had very good fishing," Hernandez said. Sailfish and marlin were also caught and released by offshore pangas at the buoys, but out at the 88 Bank mostly small dorado were caught. La Paz fishing area weather was at 90 degrees. Good quantities of sardina baits continued to be available along the Baja shore at Punta Perico and also at Isla Cerralvo. 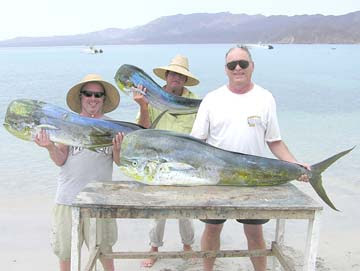 Gerardo Hernandez of Tortuga Sportfishing said the La Paz fishing area had wind on some days last week that kept Las Arenas side pangas from going out to the offshore buoys or Isla Cerralvo, as pangas were able to fish near shore areas for cabrilla and pargo lisa. On some days, dorado of 25 to 35 pounds plus some marlin and sailfish were caught at the buoys. Good quantities of sardina live bait continued to be available on the Baja shore at Punta Perico and also at the south end of Isla Cerralvo. 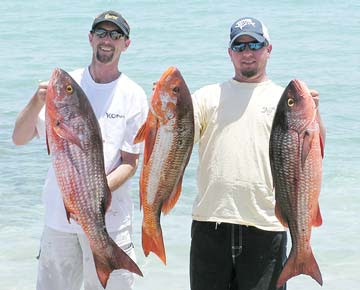 SOUTH SIDE PARGOS--Paul Humpers and Shon Logan, both of Roseville, Calif., got into good pargo action with this trio of mullet snappers while fishing south of La Paz on a Tortuga Sportfishing panga with Capt. Nufo Lucero.
Publicado por Alonso en 11:59 PM No comments: