John Gimmie and Dean Mitchell from San Diego came down for the week of November 7-14 and encountered perfect weather, not too hot, not too windy.

They fished with Captain Nufo and had excellent results.

Sunday, after getting sardinas at the south end of the island, decided to troll the Roca Montana area for wahoo. By 10:30 they had 4, ranging from 30# to 50#. All were caught on Orange Rapala X-Raps and Purple Mirrolure 111's. They also caught some nice sized Sierra.

Monday, they stayed closer to home and caught 4 25# yellowfin right in front of Hotel Las Arenas. They closed out the day catching a few small Dorado on the buoys at the mouth of Muertos Bay.

Tuesday, they got bait and headed all the way up to punta norte (Cerralvo) where they scratched ouut a nice 30# Dorado, a big Sierra, then trolled Rapalas along the east side of the island for several tough Pargo (and busted off a few too—bring 60# line, minimum).

Thursday, the tide was slack, there was hardly any wind, and the fishing was slow. Nufo switched them over to Caballitos and slow trolled for a 120# Striped Marlin about a mile off Punta Perico. They got into several Dorado on the way in.

Friday, the wind came up and they decided to go after good-eating small snapper and Cabrilla close to home, off Punta Perico.

All in all, itt was another very good week of fishing and they took home a lot of fresh packed fish to eat all winter. 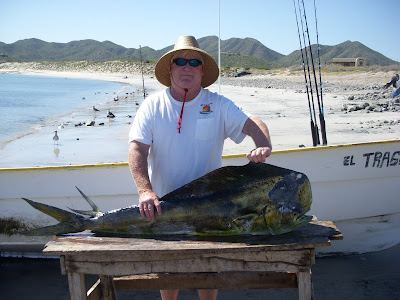 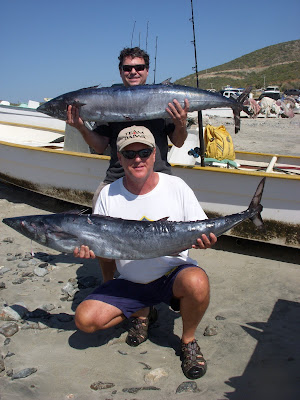 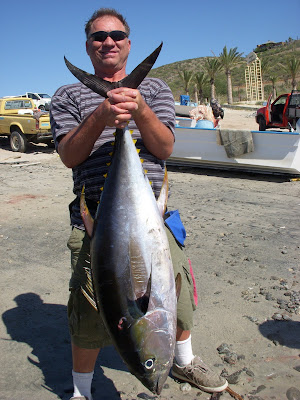