This week still we had some inconsistent fishing.

This week still we had some inconsistent fishing.  The sardine are still missing from our local waters.  We have been able to use cocinero, balihoo and zebra to catch some dorado lingering around the bay and the rooster are still in full action.  Fisherman at Punta Arena have found that trolling for snapper has proven to be successful with boats bringing in at least a couple each day weighing in the 20-40lb range.  Mixed in with these snapper are some nice cabrilla and some very large rooster.  If you were trolling a bait near the shores of Punta Arena you were pretty much guaranteed to hook a nice rooster that put up a good fight.   Fisherman have both spotted and caught a large number of Marlin, releasing most back into the ocean.  Some of these Marlin have been up to 250lbs.  The buoys haven't had many dorado under them but occasionally when you did find one it was big.  Some dorado were brought in weighing up to 50lbs.  We had a glimmer of hope with a nice bait ball of large mackeral showing up at the end of the week.  These were perfect bait fish and hopefully more dorado will be headed our way.  Fisherman in the photos are, Crissy and Pete Teichmann with rooster, dorado and Marlin just before release. 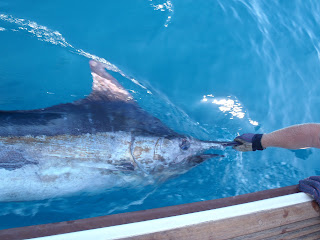 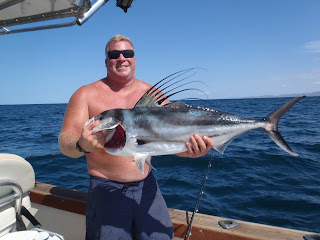 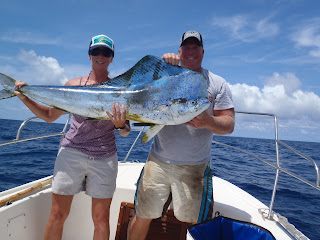 This week again has been an interesting week of fishing.  While fishing most of the week for dorado was near Las Cruces, some wind came in and scattered all the sawgrass and pushed it further North.  With most of the bigger clumps gone the dorado have been scattered about also.  Last week fisherman were boating limits of dorado and this week some boats are bringing back 2-3, and some none.  Some fisherman have opted to fish closer to shore near Punta Arena where Rooster are still there in large numbers and fisherman have been able to bag some Pargo each day.  The 88 bank has been hit or miss, with some fisherman catching some larger dorado under the buoys but not alot.  Bait is still difficult, and without alot of dorado around the Marlin are able to eat whatever they come across.  Their have been alot of big Marlin seen and caught this week most of them released.  As the water temperatures rise a bit we are hoping for more bait to bring back the big schools of fish In the cayion in fron Las Cruces for dorados and Punta Sur Cerralvo Rooster were cought.. 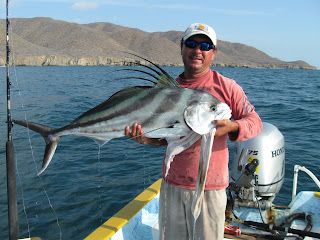 Cap. Rigo with a Roosterfish 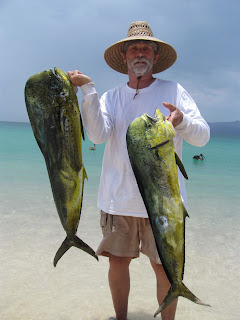