Gerardo Hernandez of Tortuga Sportfishing at La Paz said the week's weather was cooler and windy, but fishing by pangas on the south side out of Ensenada de los Muertos produced good numbers of large bottom fish. A big mix of fish species caught by Tortuga clients included mullet snapper or pargo lisa, dog snapper, barred pargo, pompano, cabrilla, and amberjack around the south end of Isla Cerralvo. The Baja coastal fishing area around the Punta Arena de la Ventana lighthouse produced good numbers of roosterfish releases in the 30 to 70-pound class plus wahoo of 35 to 50 pounds. Pangas able to run out to the buoys found dorado of 20 to 40 pounds and striped marlin released. "La Paz fishing has been as good with Rapalas as bait and we have enough bait right now," Hernandez said. 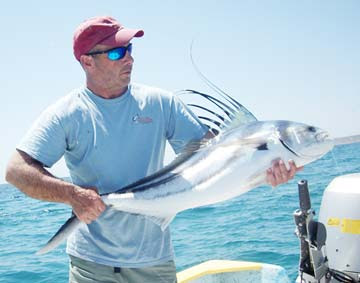 Gerardo Hernandez of Tortuga Sportfishing at La Paz said summer-like weather prevailed on the south side of the hill last week as his Ensenada de los Muertos pangas fished in air temperatures in the 90 with good humidity and some days with wind. Pangas fishing at Isla Cerralvo caught pargo mulato or barred pargo, pargo lisa or mullet snapper, pargo perro or dog snapper, cabrilla, and some amberjack. Around Punta Perico on the nearby Baja coast, Tortuga boats scored on pompano, and at the buoys, striped marlin, sailfish, and some dorado were caught. "We've been fishing with Rapalas sometimes," Hernandez said, "and they have been working for those fishermen coming here to La Paz." But we also have a good supply of live bait and that has also been working as always. Bottom fishing has been excellent the last few days." 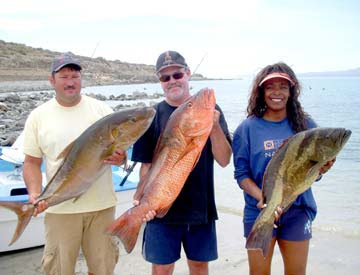 Gerardo Hernandez of Tortuga Sportfishing reported south side La Paz fishing weather in the high-80s, with water temperatures of 76 to 78 degrees at Isla Cerralvo and also at Las Arenas and Punta Perico on the Baja shore. "This week, we are now in the hot weather season," Hernandez said. Tortuga Sportfishing pangas at the offshore buoys found good numbers of dorado of 25 to 35 pounds plus many marlin mixed with sailfish. "We're releasing as many sailfish as marlin," Hernandez said. "Pangas fishing nearby areas brought in pargos of 20 to 35 pounds." Live bait was available in all fishing areas in seas that were completely calm at times. Anglers fishing on Tortuga pangas out of Ensenada de los Muertos included Tom Wong of Taiwan, his son Jerry Wong of Rowland Heights, Calif., and Don Rockefeller of Huntington Beach, Calif. 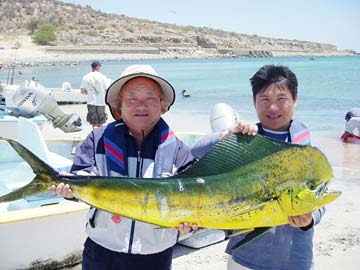 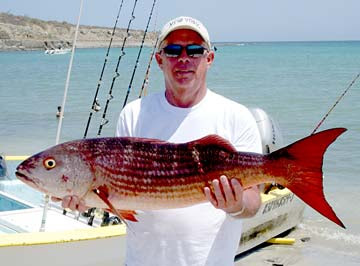 LA PAZ DORADO--Tom Wong, left, of Taiwan, and his son Jerry Wong of California fished on a panga south of La Paz in good action that produced dorado like this beauty caught with Capt. Jorge Lucero of Tortuga Sportfishing. Below, Don Rockefeller with a nice La Paz pargo lisa caught out of Ensenada de los Muertos with Tortuga Sportfishing's Capt. Rigo Lucero.