Gerardo Hernandez of Tortuga Sportfishing reported good fishing weather for his charter pangas on the Las Arenas side south of La Paz, with no wind, calm seas, and air temperatures in the 80s.Tortuga's pangas continued to fish at the south end of Isla Cerralvo and near the Baja shore at Punta Perico for a catch of smaller dorado, sierra, and assorted smaller pargos.Some boats ran to the north end of Isla Cerralvo, where fishing on some days produced good-sized yellowfin tuna, but slow action was found on other days."Sardina live bait fish were in adequate supply in all of our fishing areas," Hernandez said. "This helped our anglers avoid losing time and start fishing earlier."Hernandez also noted that information about Tortuga Sportfishing is available online at this newly reorganized website, TortugaLaPaz.com. 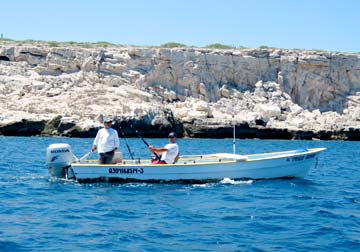 BEAUTIFUL PANGA DAY--In a scene that has been repeated an untold number of times all along the beautiful Sea of Cortez coast of Baja California, a sportfishing panga trolls along shore with a client angler from the U.S., here along the rocky bluff south of La Paz called Punta Perico. "This is where we have been working the last few days," said Tortuga Sportfishing's Gerardo Hernandez.
Publicado por Alonso en 10:21 PM No comments:

Gerardo Hernandez of Tortuga Sportfishing at La Paz reported plenty of north winds during the week that prevented his pangas on the Las Arenas side from running out to fishing locations such as Isla Cerralvo, and also made catching bait difficult. Pangas also missed fishing for dorado at nearby locations such as Boca del Alamo, south of Ensenada de los Muertos, due to rough seas, and were limited to smaller snapper species very close to the shelter of Punta Perico. Hernandez also noted more information about Tortuga Sportfishing available at his new website, Tortugalapaz.com. 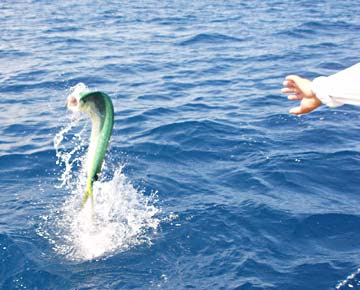 LATE SEASON DORADO--School-sized dorado were still available last week near the Baja coastline for the La Paz panga sportfishing fleet, as winter-style winds in cooling weather prevented boats from running far off shore, and this late-season mahi was photographed as it jumped for a Tortuga Sportfishing panga during fishing on the Las Arenas side.
Publicado por Alonso en 4:19 PM No comments:

Gerardo Hernandez of Tortuga Sportfishing said La Paz fishing area weather on the Las Arenas side was cooler in the 70s, with calm seas and no wind. "The winter season is coming," Hernandez said. "There are few anglers at La Paz right now."

Panga outings around Punta Perico produced dorado of 20 to 30 pounds, and boats running out to Isla Cerralvo when winds permitted found yellowfin tuna to about 30 pounds. 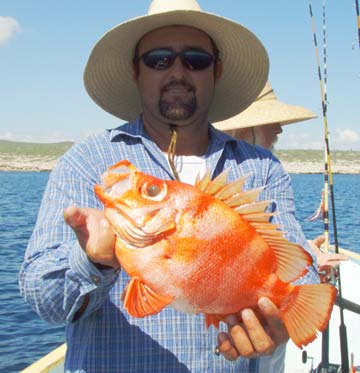 POPEYE RARITY--Capt. Jorge Lucero of Tortuga Sportfishing at La Paz shows off a popeye catalufa rarely caught in Baja waters. Known as popeye semaforo in Spanish, it is a deep water fish that is usually active at night.

Gerardo Hernandez of Tortuga Sportfishing reported generally good weather and light winds for his pangas fishing on the Las Arenas side south of La Paz, but with heat lightning at night and some rain ending at dawn over the city. "We've also had some light rain in our fishing areas," Hernandez said, "and the season is changing, with some days producing lots of fish and other days very slow."Hernandez said pangas running out to the north end of Isla Cerralvo found very few fish. The best action was found close to the Baja shore off Punta Perico and Ensenada de los Muertos, where catches included dorado and some tuna.Good quantities of Humboldt giant squid and sardina baits were available. "We're hoping that the fishing improves in the next few days," Hernandez said. 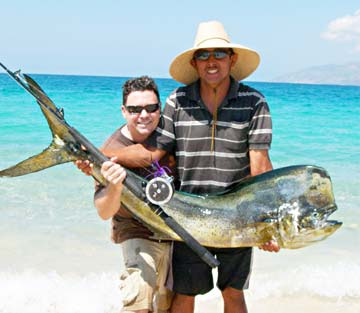