Gerardo Hernandez of Tortuga Sportfishing at La Paz reported warm weather in the 90s, with calm seas around Ensenada de los Muertos and Isla Cerralvo. Anglers fishing with abundant sardina baits did well on good-sized dorado at the buoys and larger pargo lisa at Punta Perico and Isla Cerralvo."We have a lot of sardina bait available," Hernandez said. "People who have been fishing with us for years are surprised by how much bait there is throughout our fishing area." 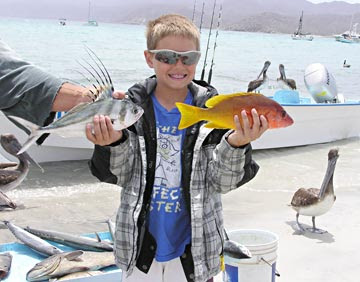 MIXED SPECIES AT LA PAZ--Cody Rawson and his father Teddy Rawson of Fontana, Calif., fished south of La Paz on a Tortuga Sportfishing panga for a catch of mixed species including this roosterfish and very brightly colored snapper.

Gerardo Hernandez of Tortuga Sportfishing reported offshore winds preventing his pangas from running out to the north end of Isla Cerralvo, but yellowtail and dorado caught closer to Punta Perico.Inshore fishing in sheltered waters produced dog snapper, barred pargo, sierra, cabrilla, and lots of bites from mullet snapper. Good concentrations of mullet snapper were also seen at the south end of the island. 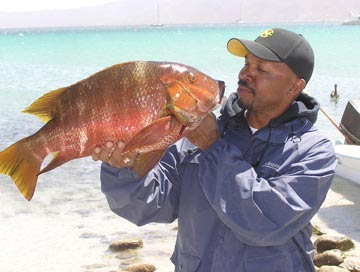 Gerardo Hernandez of Tortuga Sportfishing reported warmer air temperatures in the 90s south of La Paz, with some wind, but with no boats prevented from fishing in good dorado action for fish to 35 pounds, plus pargo lisa, yellowtail, larger dog snapper, cabrilla, and sierra of mixed sizes near shore.
"This week, we had more boats fishing in all areas," Hernandez said, as crowds of locals came to the beaches for the approaching Easter holiday weekend. 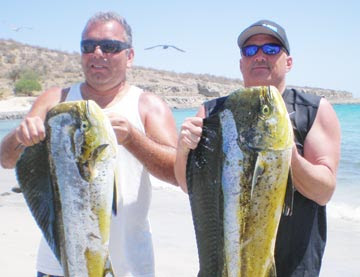 EARLY DORADO SEASON--Showing off a nice pair of quality dorado caught in this year's early season at La Paz are Richard Hunter and Mile Betz of Newport Beach, Calif., who fished on the south side of the city aboard a Tortuga Sportfishing panga.
Publicado por Alonso en 1:22 PM No comments:

Gerardo Hernandez of Tortuga Sportfishing at La Paz reported generally good fishing for his charter pangas on the Las Arenas side, with some winds offshore hampering runs to Isla Cerralvo, but good action for dorado at buoys closer to the Baja shoreline. "Our anglers prefer the dorado," Hernandez said. "We're getting small squid for bait, and sardina for yellowtail, cabrilla, and pargo that we're catching around Punta Perico. We have plenty of bait." 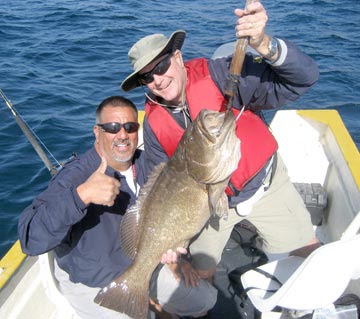 LAS ARENAS SIDE--Dave Negrete and Kerry Smith with a real nice cabrilla caught during panga fishing with Tortuga Sportfishing on the Las Arenas side south of La Paz. They also scored on snapper and dorado with Tortuga's Capt. Nufo Green.
Publicado por Alonso en 9:19 AM No comments: