Dos Hernandez of Tortuga Sportfishing said his pangas on the south side of La Paz were fishing mostly close to shore in sheltered water due to consistent north winds, with catches including sierra, small cabrilla, and pargo. On Wednesday, lighter winds allowed pangas to fish at the south end of Isla Cerralvo for sierra and huachinango, and at Punta Perico good counts of pargo lisa were scored, although fishing was slowed by excess numbers of greenjack and needlefish competing for baits.
Publicado por Alonso en 9:19 AM No comments:

Gerardo Hernandez of Tortuga Sportfishing said the La Paz fishing area had sharply lower air temperatures in the 60s during the week, with strong north wind over the weekend. "Tuna, dorado, wahoo, and some marlin are in the area of Isla Cerralvo," Hernandez said. "However, with this unfavorable weather, we are canceling boat departures and we can't guarantee that anglers will be able to get into the action." Earlier, pangas on the south side of La Paz fished at the island for offshore species and near shore at Las Arenas for sierra during periods of strong wind. "That was about the best that could be done," Hernandez said.
Publicado por Alonso en 12:14 PM No comments:

Gerardo Hernandez of Tortuga Sportfishing said southern La Paz fishing waters got some strong north winds early in the week that lowered water temperatures and slowed the action for pangas fishing the Las Arenas side out of Ensenada de los Muertos. At the end of the week, pangas were still looking for good concentrations of yellowfin tuna that had been scattered by the rough weather. Some tuna were caught at the north end of Isla Cerralvo. Good action was found for pargo to 15 pounds and sierra around Punta Perico, and dorado mixed with continued wahoo at the south end of the island. Live bait was available both at Ensenada de los Muertos and Isla Cerralvo. 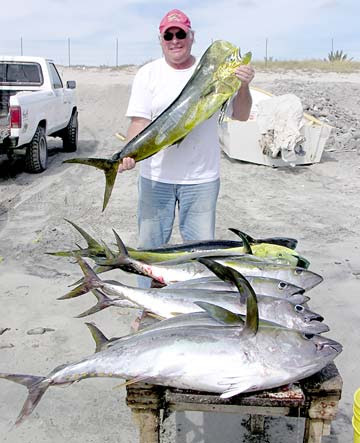 TORTUGA PANGAS--John McVay of Valencia, Calif., got into a good haul of yellowfin tuna and dorado while fishing the Las Arenas side of La Paz aboard a Tortuga Sportfishing panga with Capt. Rigo Lucero. 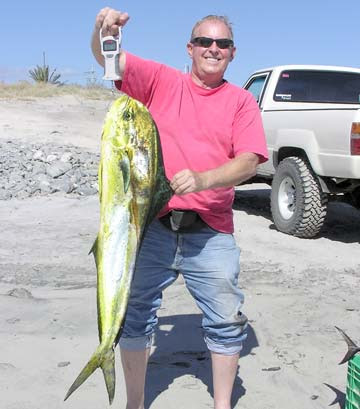