Gerardo Hernandez of Tortuga Sportfishing said some charter reservations wee cancelled during the week due to the distant passage of weakening Hurricane Andres, although no effects were felt at La Paz except for some clouds and light scattered showers without wind.
"Air temperatures were very agreeable in the 80s," Hernandez said. "The fishing continued good throughout our area. At the buoys, we caught large dorado in the 50-pound class, and dorado of 25 to 30 pounds were caught along the coast at San Isidro."
Tortuga Sportfishing pangas running out to the south end of Isla Cerralvo landed wahoo on trolled Rapalas.Close to the Baja shore at Punta Arena and south of Ensenada de los Muertos roosterfish were very active with constant bites. 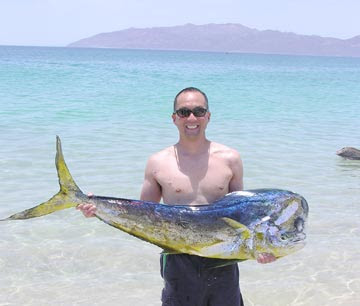 LAS ARENAS-SIDE PANGA--Eric Saiki of Torrance, Calif., fished on the Las Arenas side south of La Paz several days with Tortuga Sportfishing for good panga action on these dorado.

Gerardo Hernandez of Tortuga Sportfishing at La Paz reported continued summer-like fishing conditions during the week, with air temperatures in the mid-90s, some clouds at sunrise, and no winds. A distant tropical depression was present in the Pacific Ocean far to the south.
Fishing for Tortuga pangas south of La Paz continued very good for dorado of 40 to 50 pounds caught at the buoys, plus dog snapper to 40 pounds, wahoo, and some tuna at the south end of Isla Cerralvo.
"Generally, everything is going great with the fishing," Hernandez said. "We have plenty of bait for our daily fishing and the fishermen are happy." 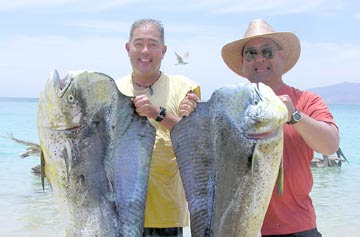 LA PAZ BIGGIES--Derek Tomita and Ron Uchimiya fished at La Paz aboard a Tortuga Sportfishing panga for great results on dorado into the 50-pound class including these two trophies.

Gerardo Hernandez of Tortuga Sport Fishing reported another week of excellent fishing weather for his pangas on the Las Arenas side of La Paz. "No wind anywhere," Hernandez said. "The sea has been completely calm. We have full summer-style heat in the 90s. But, La Paz still has just a few anglers."
Very good dorado fishing was found by Tortuga pangas running to the buoys. "The dorado went to 40 and 50 pounds. Everyone is happy," Hernandez said.
Some wahoo were caught at the south end of Isla Cerralvo and some marlin were also seen in the area. Larger pargo also continued to be present at the island. 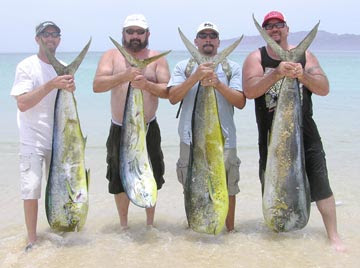 Gerardo Hernandez of Tortuga Sportfishing reported summerlike weather in the 90s for his pangas fishing on La Paz' Las Arena side south of town, with completely calm seas extending through midweek, dorado continuing at the offshore buoys, and larger dorado plus wahoo caught at the south end of Isla Cerralvo.
At the north end of the island, Tortuga pangas caught amberjack and more dorado.
"We also still have good numbers of pargos at Isla Cerralvo," Hernandez said. "Pargos were also caught at Punta Perico, and some big roosterfish around Ensenada de los Muertos. We have plenty of sardina bait." 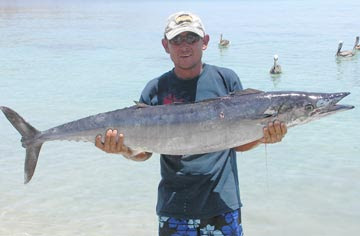 WAHOO AT LA PAZ--Capt. Nufo Green of Tortuga Sportfishing with a real nice wahoo caught during the current La Paz bite centered around the south end of Isla Cerralvo.

Gerardo Hernandez of Tortuga Sportfishing on the Las Arenas side of La Paz reported moderate air temperatures in the 80s made comfortable in the city by seasonable Coromuel southwest winds at night and during the early morning hours. "We are enjoying these cool winds," Hernandez said.
Tortuga pangas fishing out of Las Arenas had calming weather after a period of west winds. Good fishing was found at the north point of Isla Cerralvo for amberjack and some dorado.
At the south end of the island, good numbers of pargo perro and pargo lisa were caught, as well as wahoo.
At Punta Perico on the Baja shore, pangas found yellowfin tuna of 20 to 25 pounds plus some dorado.
Good supplies of sardina bait fish were available at Isla Cerralvo. 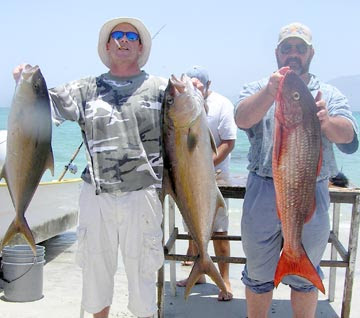 LA PAZ MIXED SPECIES--Tim and Lyle Davis of Nevada fished the Las Arenas side of La Paz with Tortuga Sportfishing for good panga action on a variety of fish species including these 2 pez fuertes, or amberjack, on the left, this pargo lisa, and wahoo. They went out with Tortuga's Capt. Nufo Green.
Publicado por Alonso en 2:54 PM No comments: