Gerardo Hernandez of Tortuga Sportfishing said his pangas at Las Arenas had good weather most of the week, but with wind arriving on Friday, as boats concentrated around Punta Perico for good numbers of 15 to 25-pound yellowfin tuna plus steady dorado. "Because of the wind, we weren't able to fish at Isla Cerralvo where there are good numbers of wahoo," Hernandez said. "We are getting bait close to Punta Perico and there is no problem finding good quantities." Gerardo Hernandez of Tortuga Sportfishing said weather conditions on the Las Arenas side of La Paz were noticeably cooler last week with some north wind. "Anglers should bring jackets for the ride out in the mornings," Hernandez said. "Right now the wind is not very strong, so we're hoping that we can continue to fish easily." Southern La Paz fishing waters continued to produce good counts of school-sized yellowfin tuna and dorado for Tortuga pangas fishing the south end of Isla Cerralvo. Smaller sardina baits were found near Ensenada de los Muertos and large bait was available at Isla Cerralvo when wind allowed the trip across the channel. "For the last 3 days, wahoo fishing has also been very good around the south end of the island," Hernandez said. Anglers fishing with Tortuga during the week included the Phil and Robert Taylor group of fire fighters from Las Vegas, who had several days of good action with Capts. Rigo and Jorge Lucero, and Nufo Green.

Gerardo Hernandez of Tortuga Sportfishing said Las Arenas side fishing weather was sunny with windy and calm days alternating last week. Tortuga charter pangas continued to find very good action on yellowfin tuna of 20 to 50 pounds and dorado of 20 to 25 pounds off the Baja coast at Ensenada de los Muertos, San Isidro, and El Alamo. Tuna and dorado mixed with early season sierra were also caught at Punta Perico. Some wahoo were again found off the south end of Isla Cerralvo on trolled Rapalas in both purple and black-white. "We are having no problem finding a lot of fishing action," Hernandez said. "There is plenty of bait throughout all the usual areas, and the best fishing has been with the sardinas." Gerardo Hernandez of Tortuga Sportfishing reported good weather and sea conditions on the south side of the hill as his pangas fishing out of the Ensenada de los Muertos south-facing launch spot scored good counts of dorado and yellowfin tuna outside Punta Perico and down the coast to El Alamo. Pangas running out to the south end of Isla Cerralvo also got into good action for wahoo. "This week we had very good wahoo fishing," Hernandez said. "The wahoo were of good size, 45 to 50 pounds, south of the island on Rapalas." Sardina bait for dorado and tuna was in good supply both locally and at Isla Cerravlo. 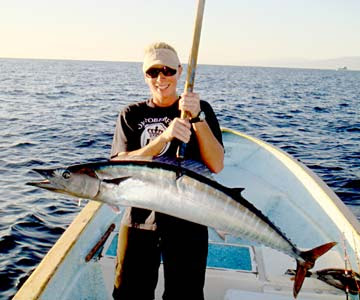